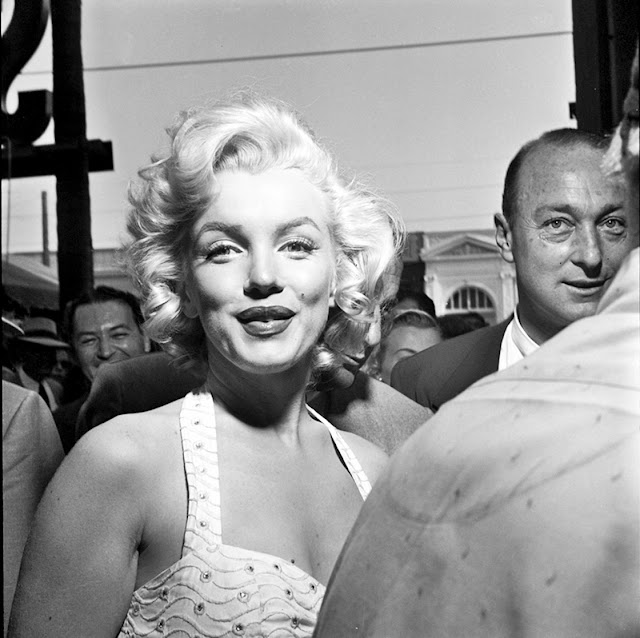 Marilyn Monroe and Jane Russell placed their hand and footprints at Grauman's Chinese Theatre surrounded by a huge, adoring crowd on June 26, 1953, in connection with the opening of Gentlemen Prefer Blondes. Russell recalled:

"We were both wearing light, summery dresses and high heels as we posed, arms linked together, for the photographers. We were thrilled beyond words. While I was placing my feet in that square of soggy cement, I thought of all the times when Pat Alexander (a high school friend) and I tried to fit our feet in the footprints of famous actresses and how we figured that they must have worn the tiniest shoes for the occasion. Our feet never fit in. Now my prints were in that cement and I couldn't believe it. I'm sure Marilyn felt the same. Always one for personal comfort, I was wearing my usual big shoes, so no aspiring actress will have any trouble whatsoever getting her feet into my footprints!" 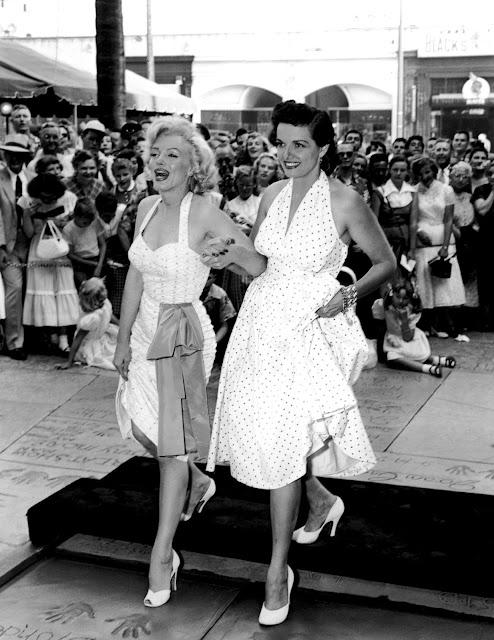 Marilyn embedded a rhinestone in the cement to dot the "i" in "Marilyn", which was later pried out and replaced with a piece of white glass. Monroe had visited the theatre for many years during her childhood & adolescence, admiring the stars' prints (particularly her favourite actress Jean Harlow's square) and like Russell dreamed of one day placing her own mark. 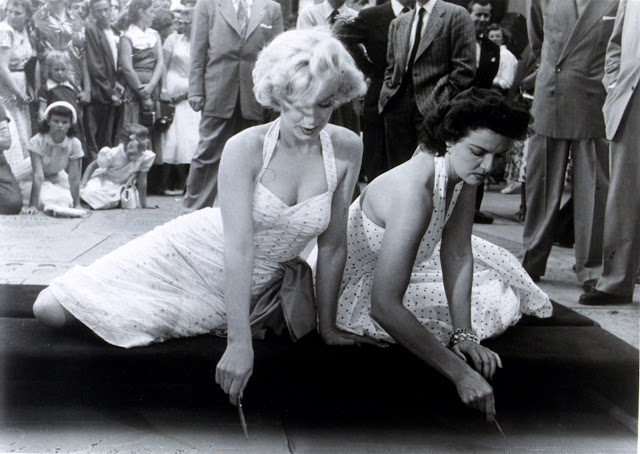 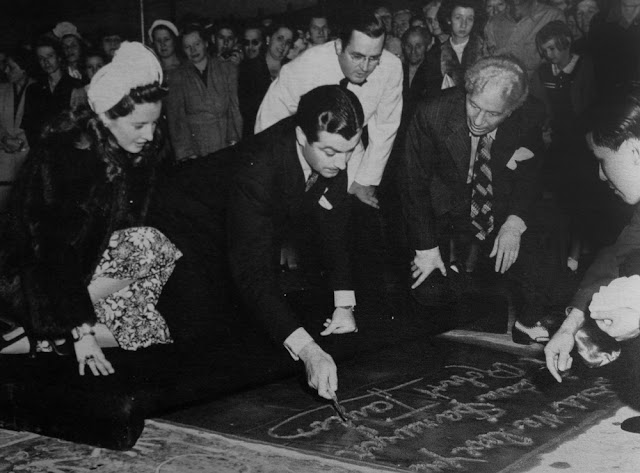 Husband and wife at the time they placed their prints, Stanwyck and Taylor divorced in 1951, but remained close, even appearing in a movie together during the 1960s. Taylor died in 1969. By the 1980s, their square had deteriorated so badly that Grauman's invited Stanwyck to place her prints in a new cement slab, with a view to replacing the crumbling old one. She refused, as to do so would mean that Taylor's name would be omitted from the forecourt. The cracked, worn, original square remains in place today. 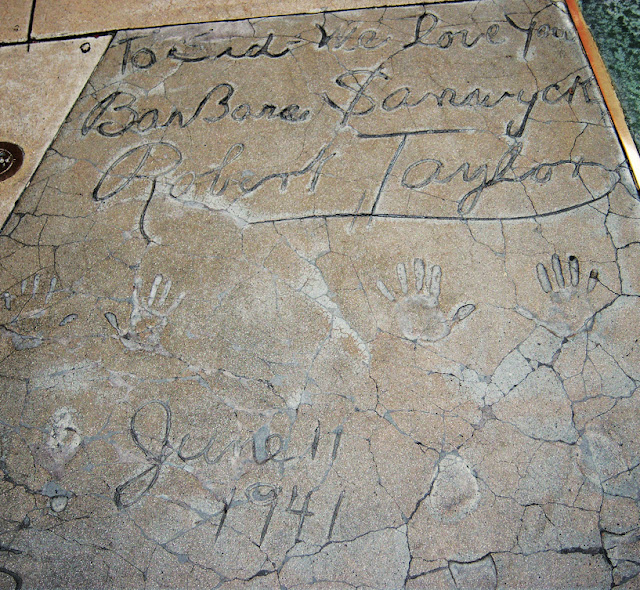 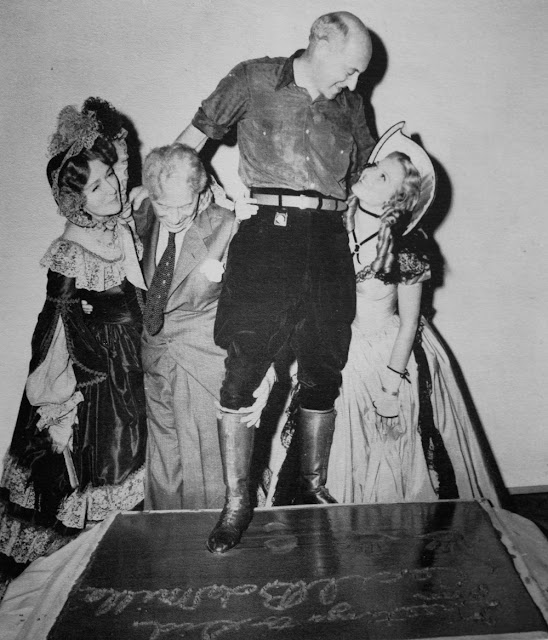 The screen's most famous director, DeMille was too busy filming his epic Reap the Wild Wind (1942) to appear at the theatre, so Grauman's sent the cement slab over to the set for him to plant his prints. Here he assisted by actress/columnist Hedda Hopper, Sid Grauman and actress Martha O'Driscoll. 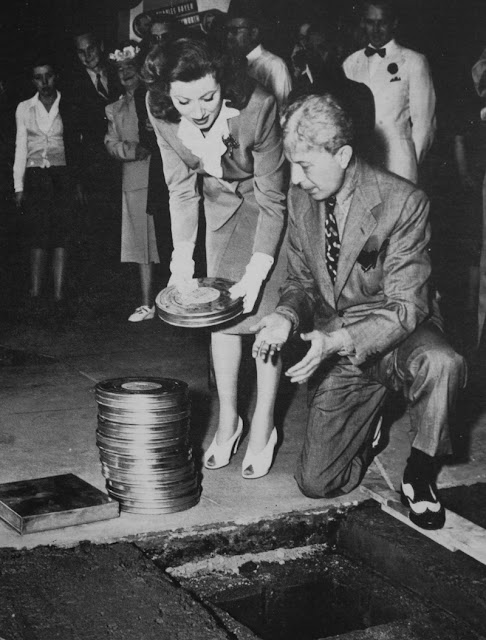 The ceremony of Greer Garson, in connection with her war picture Mrs Miniver, was unique in that beneath her cement square a "time capsule" was planted. In it she placed a print of the movie, a copy of the Mrs Miniver manuscript and the book on which the film was based. The time capsule lies, unopened, beneath the Garson square to this day. 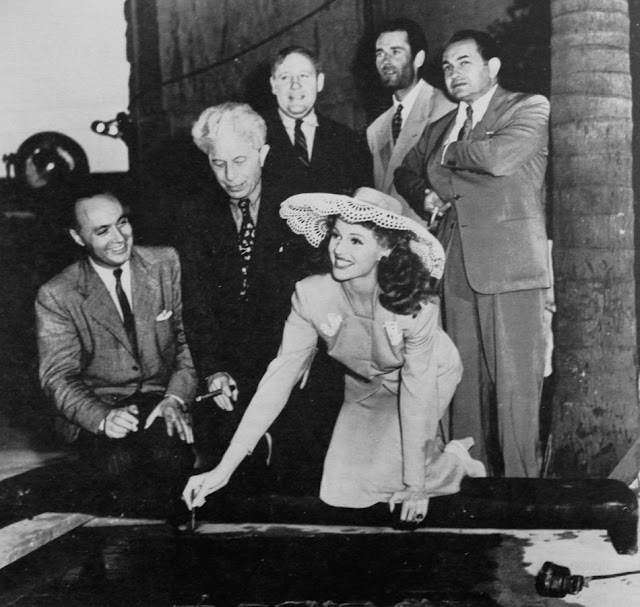 It was a rare all-star occasion when Rita Hayworth, Charles Boyer, Charles Laughton, Henry Fonda and Edward G.Robinson placed their prints in cement on the same day, in connection with 20th Century Fox's Tales of Manhattan (1942). 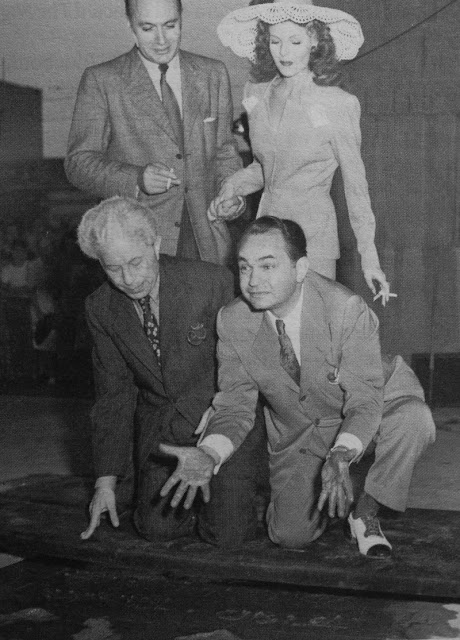 In 1948, Hayworth became involved with Prince Aly Khan, a married man and son of the Aga Khan - spiritual leader of millions. She left Hollywood amid controversy. Sid Grauman was asked to remove her square from the theatre. He refused.
Hayworth later married and divorced Khan. 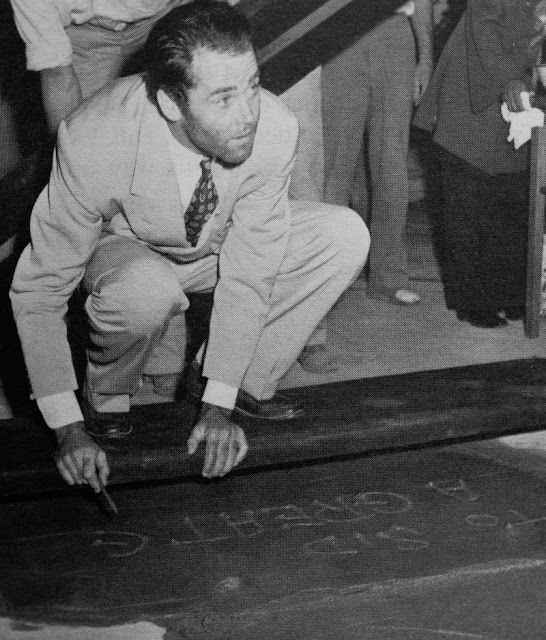 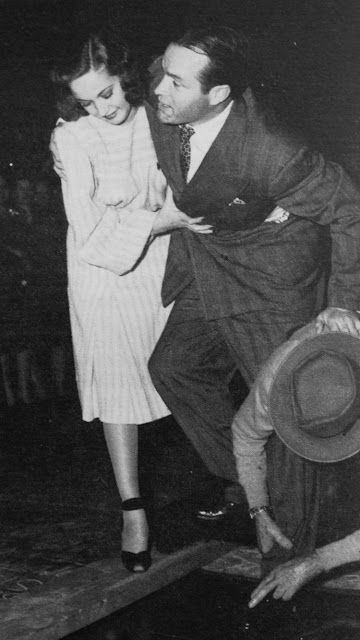 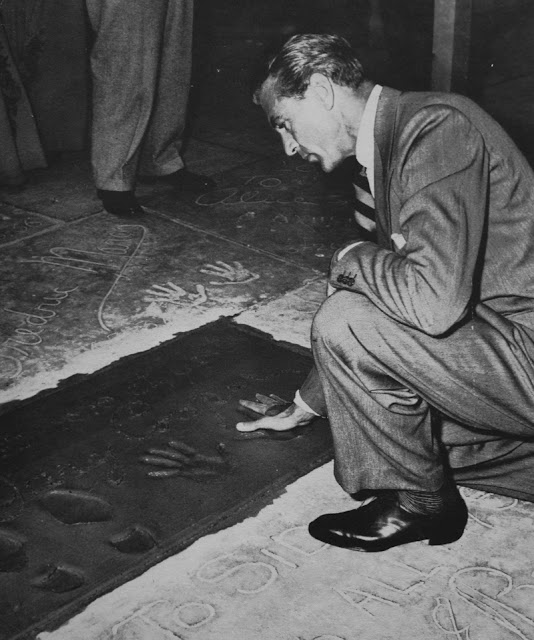 Cooper made his prints on August 13, 1943. Superstitious, he dated the cement with August 14, not wishing to attract bad luck! 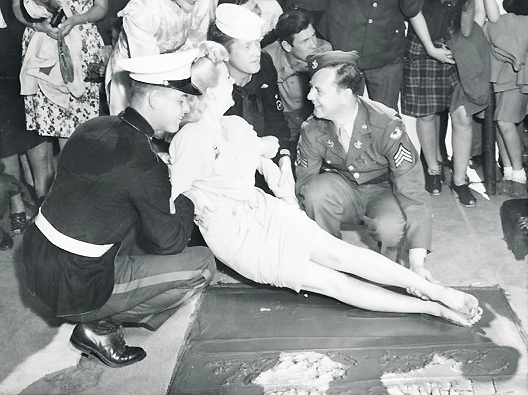 Owner of the most famous pair of legs in Hollywood, and the biggest box-office star of the time, Betty Grable imprinted not only her hands and feet, but also her famous million dollar legs. It took half an hour to imprint her gams in the cement. Supported by servicemen, her short skirt kept hiking up. Betty's mother had suggested she wear a swimsuit, but she vetoed the idea, saying a skirt was more modest at such an event. The servicemen moved her about several times without achieving a satisfactory cast of her right leg, then attempted to lift her into it and nearly dropped her, screaming, into the wet cement. The ceremony finally complete, she turned away and slipped onto the cement. Cement artist Jean W.Klossner told her he could repair the damage to the square with a trowel but could do nothing about her soiled dress. She hurriedly departed for home, to see if she could salvage her outfit before it set. 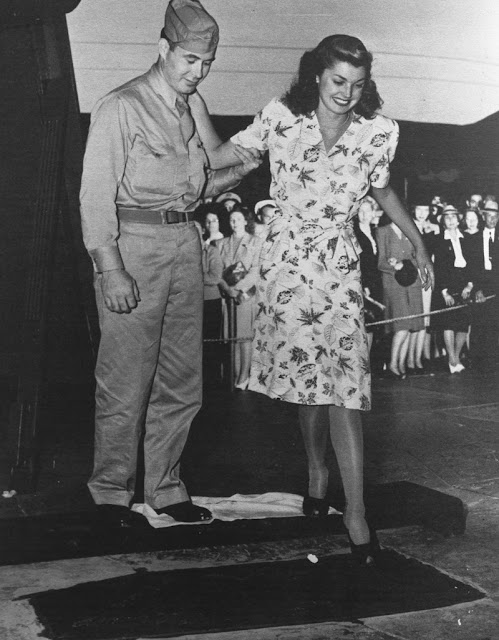 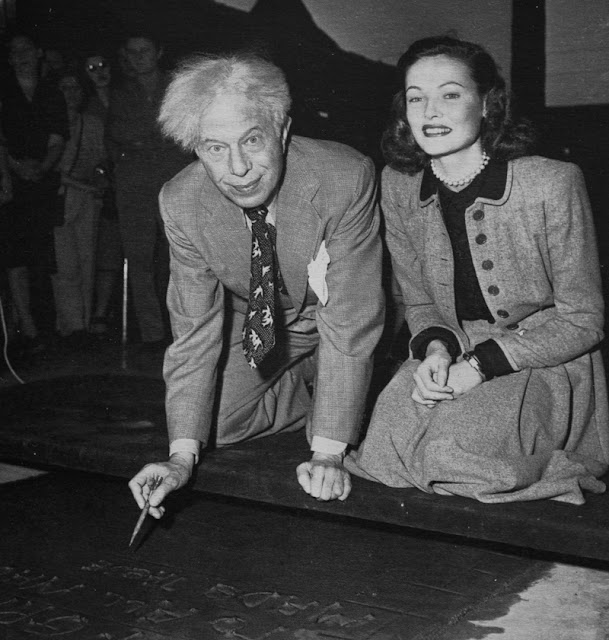 Gene Tierney placed her prints in connection with the Academy Award-nominated role in Leave Her To Heaven (1945). She shared her ceremony with Sid Grauman, who finally placed his own mark in the forecourt he had made famous. 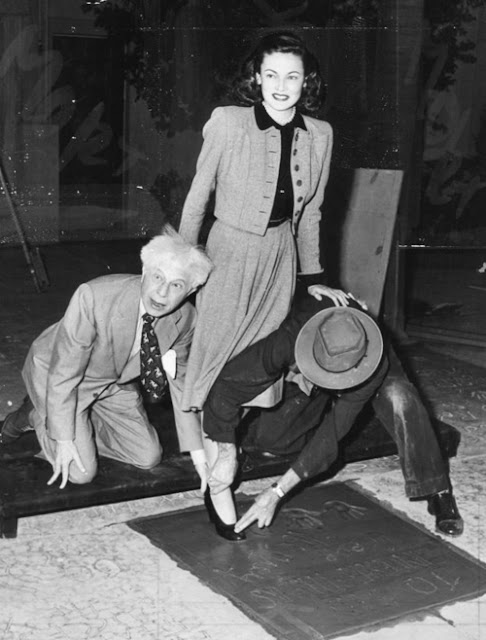 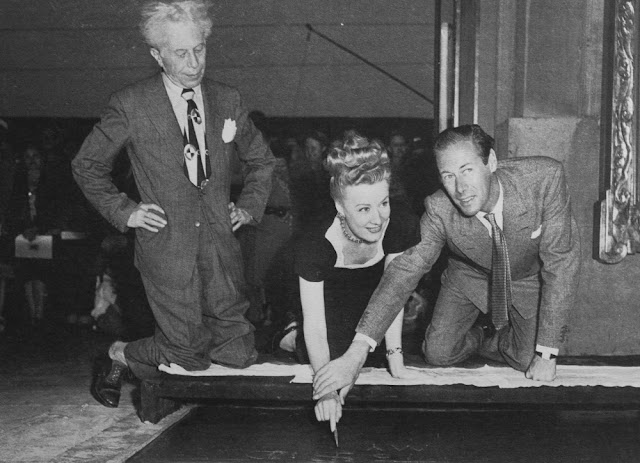 Dunne and Harrison placed their prints in connection with their film Anna and the King of Siam (1946), the first version of The King and I. Dunne recalled: "It was a time when I was wearing especially high heels. The prints look like they belong to a dwarf!" 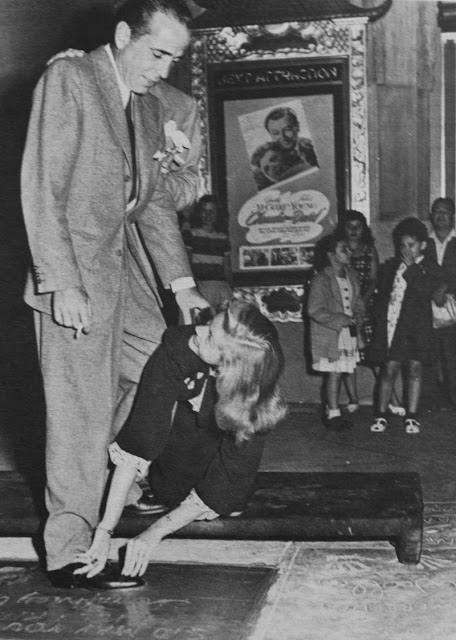 Bogart placed his prints in connection with The Big Sleep (1946) and wore the "lucky" shoes that he had worn in Casablanca. For some inexplicable reason, Bacall was not invited to place her own mark in the forecourt. Years later in 1953, 20th Century Fox arranged and publicised that Bacall would be placing her own prints at the premiere of How To Marry a Millionaire. Bogart, who according to Bacall loved "a chance to puncture Hollywood's ego" said to her: "Why don't you refuse?" She did - and the event had to be cancelled. Bacall commented later that any aspiring actor would not see her prints at the theatre "and would not miss them." 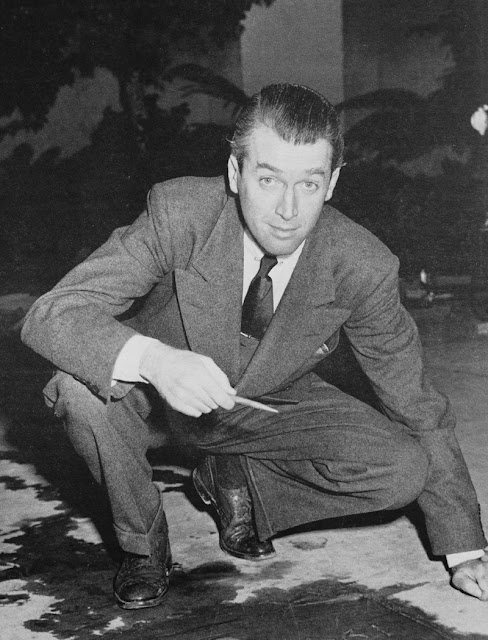 Stewart was so nervous at his ceremony that he misspelt his first name. The cement had to be smoothed over and he had a second, more successful go!

Have a glamorous Saturday!
DP x