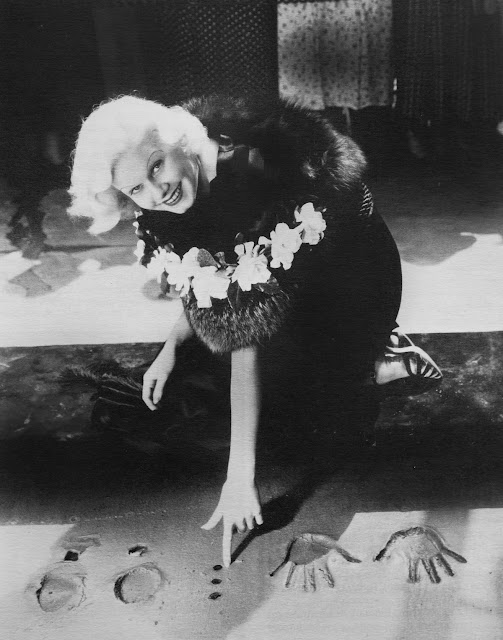 One of America's most famous landmarks - Grauman's Chinese Theatre - has over the years been a beacon for those wishing to relive the glamour of Hollywood's past. Here stars old & new have their hand and footprints immortalised in cement. The tradition was started by theatre owner Sid Grauman who thought of it initially as a publicity stunt. There are several stories of how the custom began - the most widespread being that film star Norma Talmadge was visiting the construction site one day when she unwittingly stepped in wet cement. In any case, Talmadge, Mary Pickford, Douglas Fairbanks & Grauman himself were the first celebrities to place their prints in wet cement on April 15, 1927. 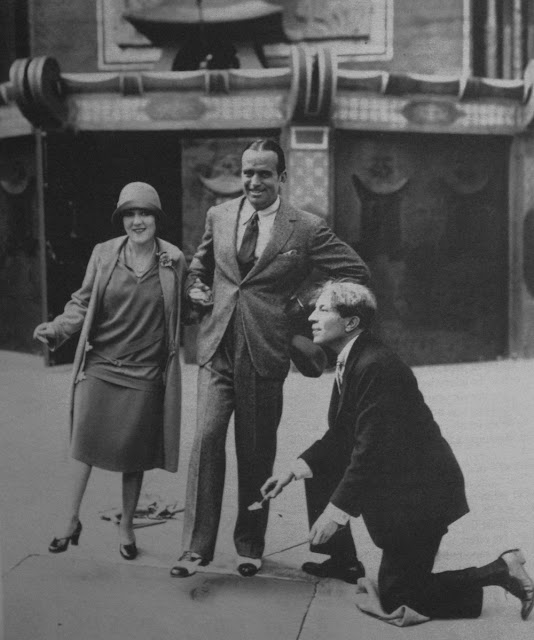 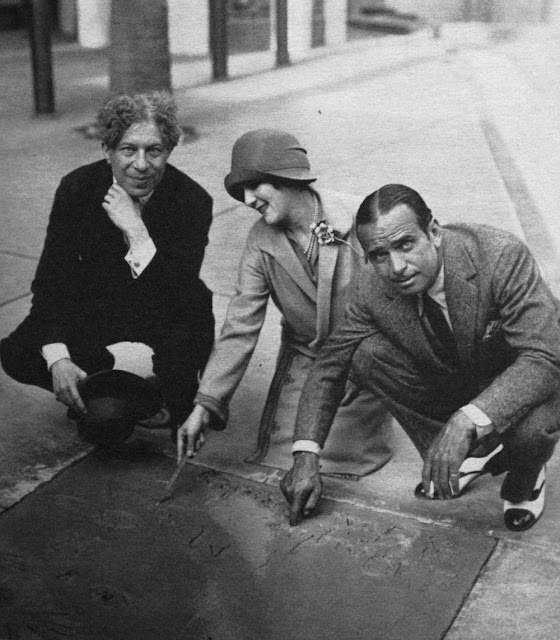 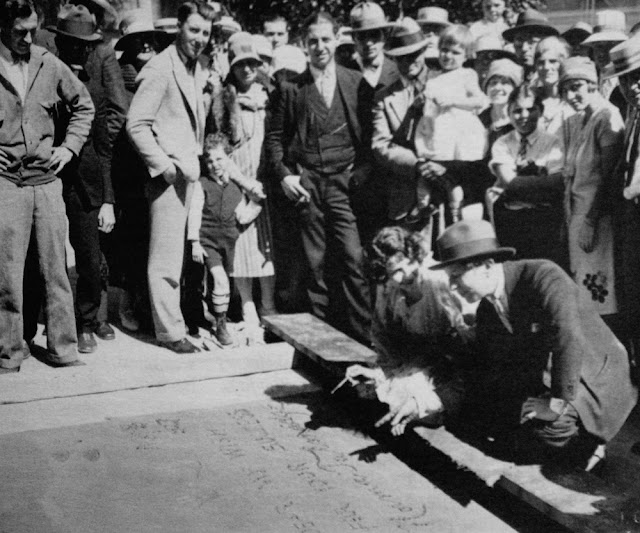 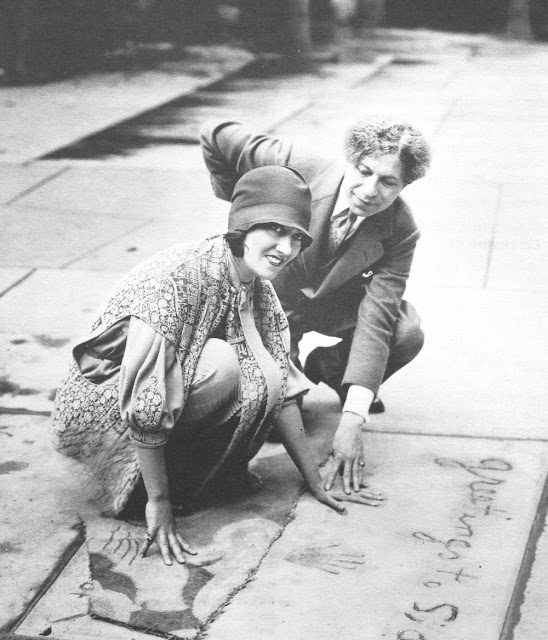 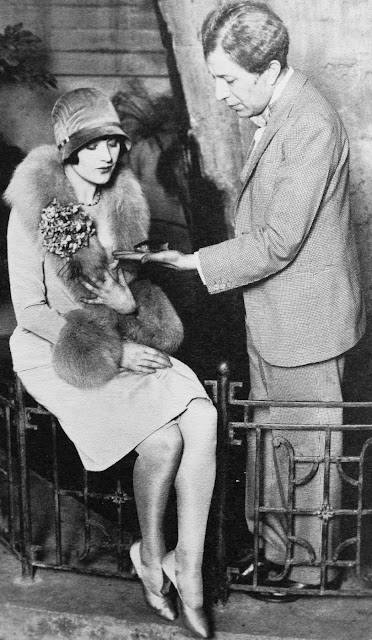 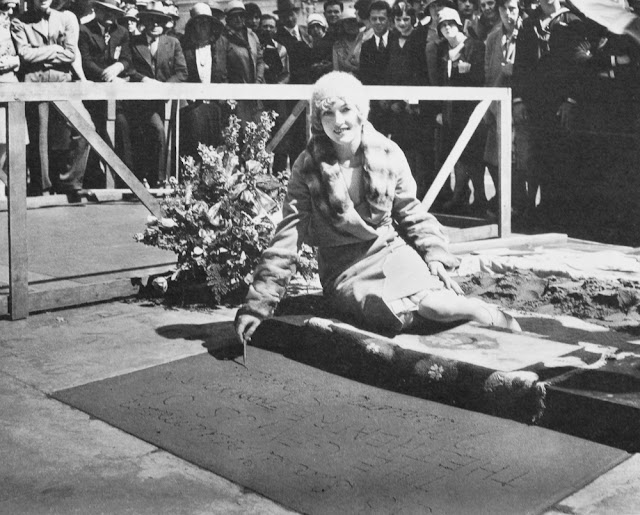 Marion Davies made her prints just before a matinee performance of her film The Broadway Melody (1929). Her appearance in the forecourt caused a commotion amongst the fans who had lined up to purchase tickets, & deserted the line to watch. At the end of the ceremony, they broke into a spontaneous cheer. 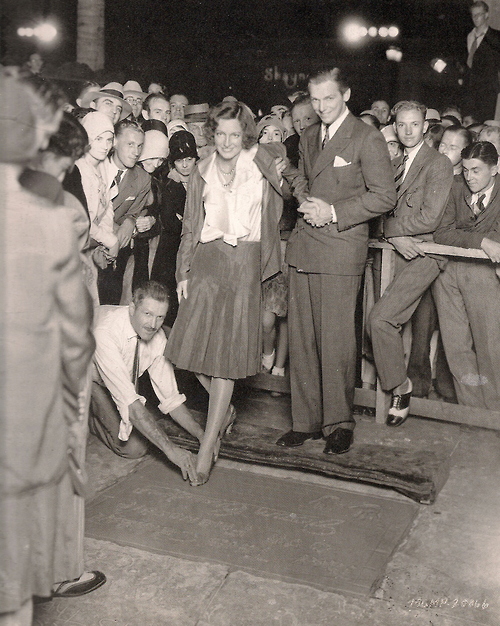 Joan Crawford was accompanied by her husband of 3-months - Douglas Fairbanks Jr. Though they were both well-known, the ceremony was arranged by MGM to promote their new female star, and Fairbanks was not invited to place his own prints. 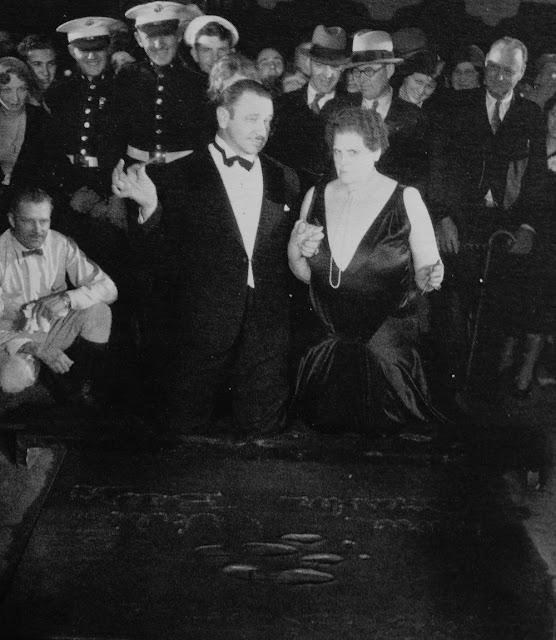 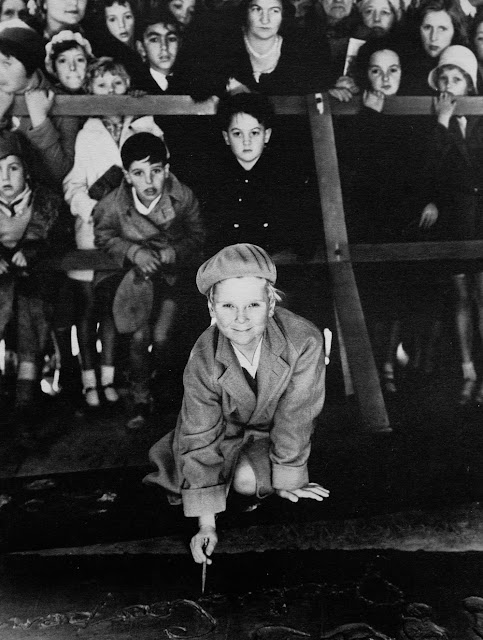 The first child star of the sound era, Cooper made his prints during the run of his film The Champ (1931). Over 40 years later as a character actor he was making a television episode in the forecourt of the theatre when crew members spotted his square. Cooper had forgotten all about it & remarked that "it was quite a thrill" to see it after so many years. 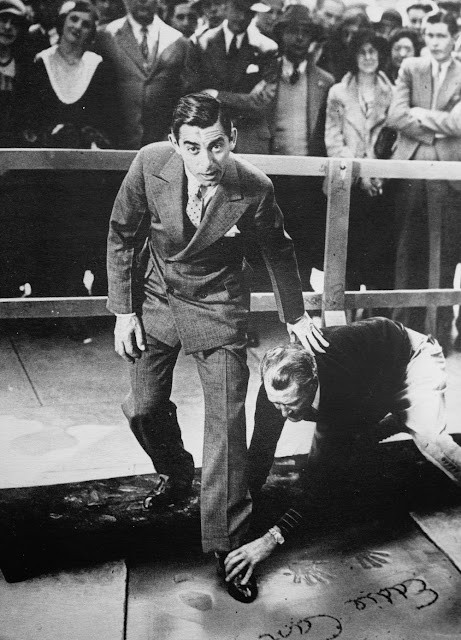 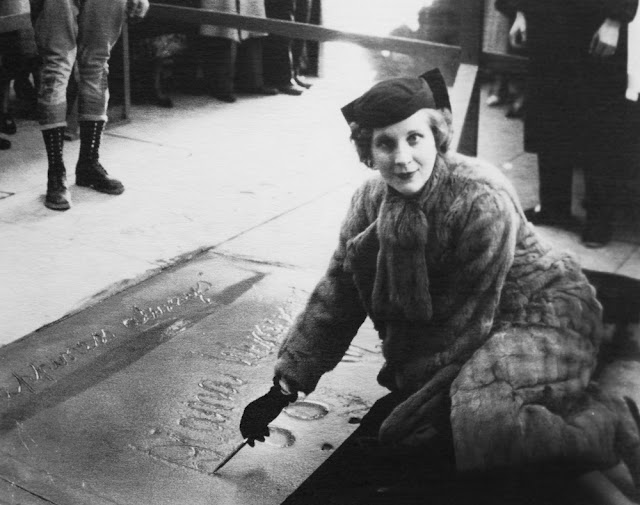 Wynyard was the first non-Hollywood star (she was English) invited to make her imprint in connection with her film Cavalcade (1933). Grauman began a lengthy speech praising her performance, but by the end of it was clearly at a loss. He turned to Wynyard: "My dear, I'm sorry, but just what is your name?" 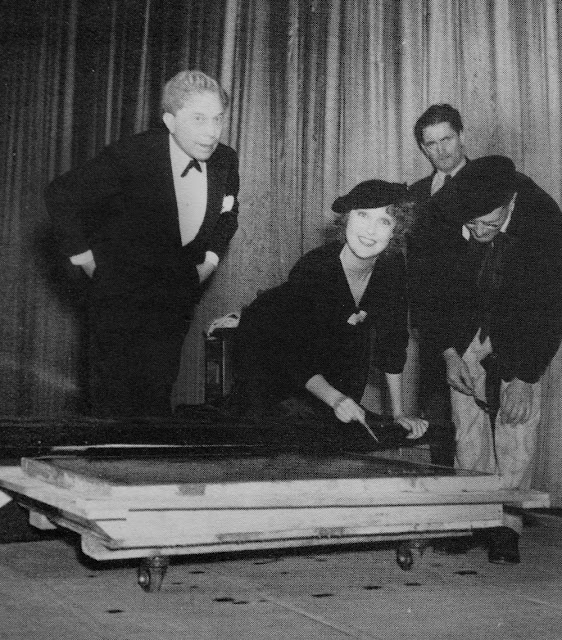 Jean Harlow actually had two ceremonies & two squares. The first one - on September 25, 1933 - was in connection with her movies Dinner at Eight and Bombshell. Harlow appeared onstage in front of a large paying audience, placed her prints, and the cement slab was wheeled off to be placed in the forecourt when it fell to the ground and smashed in front of the crowd. Jean was invited back 4 days later for a second attempt (pictured at the top of this blog entry) - in the forecourt this time rather than onstage. Along with her signature, hand and footprints, she also placed three pennies in the wet cement for luck. The coins didn't last long however, and were pried out by thieves. 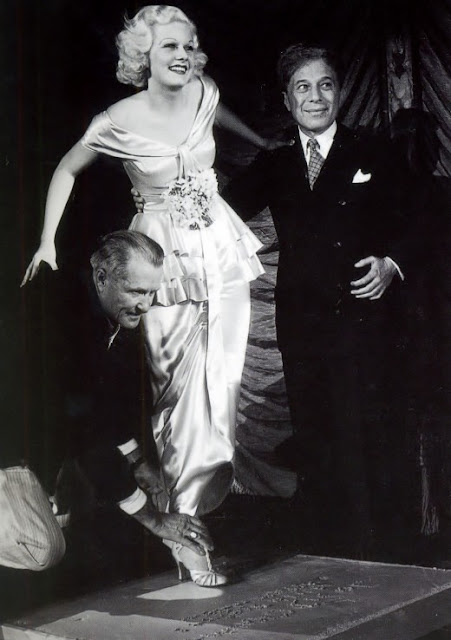 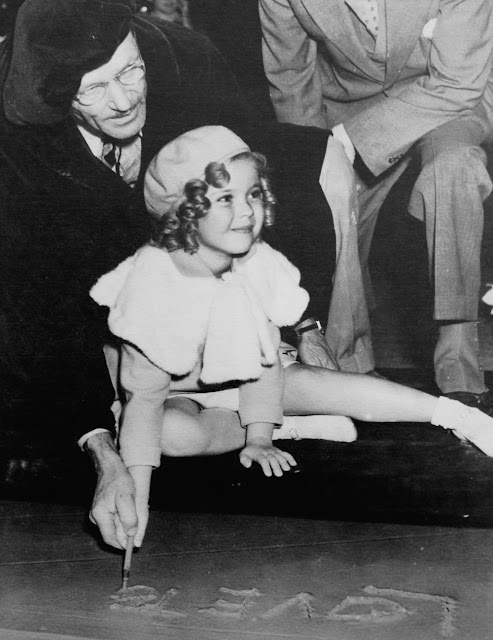 Six year old Shirley Temple was so tiny when she made her prints that cement artist Jean W.Klossner had to help her write her own name. 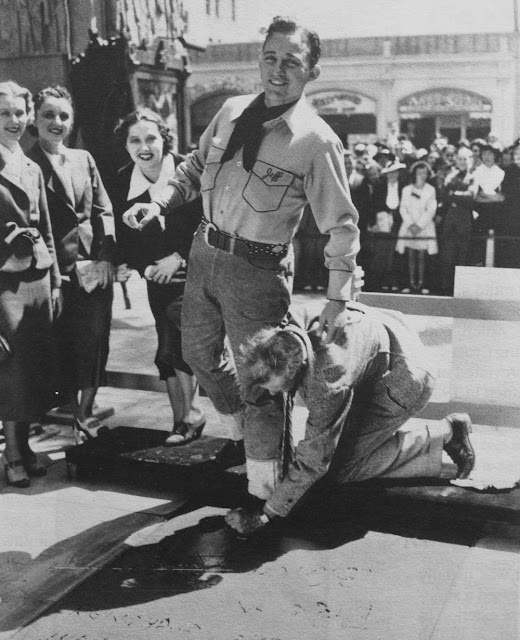 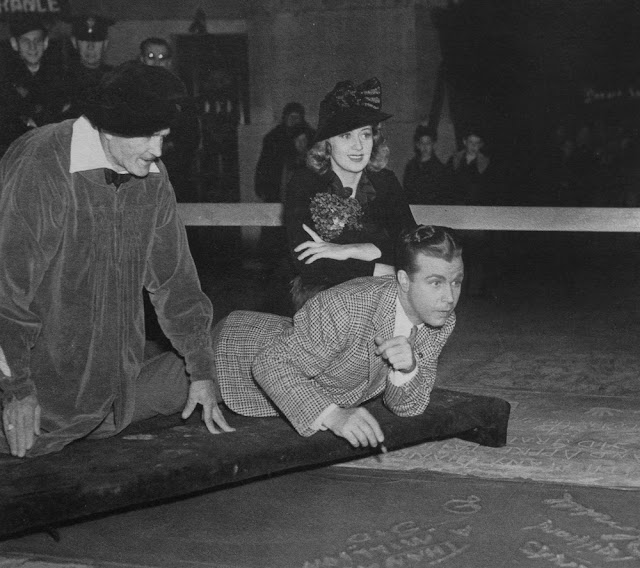 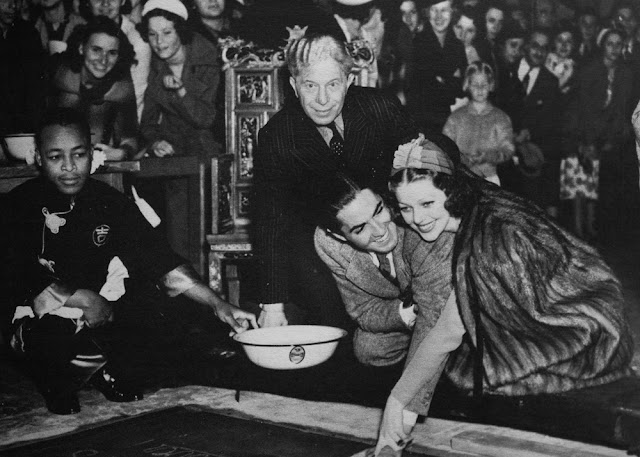 The Power/Young ceremony attracted record crowds and extra police were called in to deal with the fans. Young recalled: "Unfortunately I have no recollection of that particular event outside of the fact I was delighted with the honour of it - then and now. Emotionally, that was a very happy period in my life, so I automatically smile when I think of it." 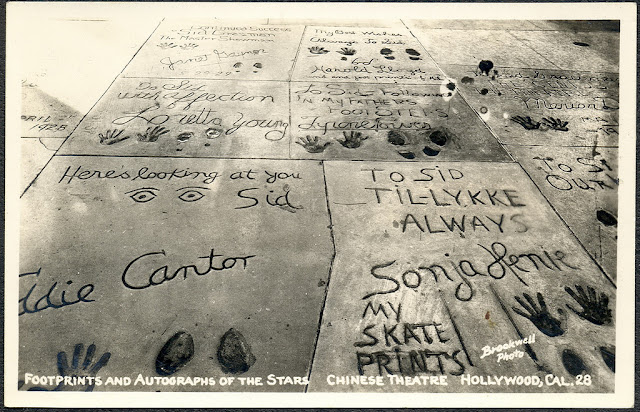